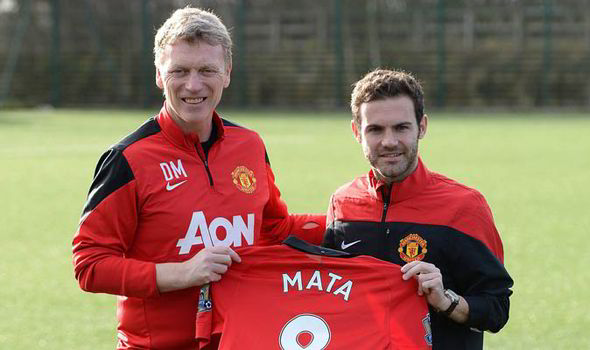 A quick overview of the January dealings of the premier league teams. Whether they be winners, losers or somewhere in between.

Arsenal have once again snatched defeat from the jaws of victory in allowing the Draxler deal to fall through showing once again Wenger’s lack of backbone. Kallstrom has come in but he is not the striker Arsenal so desperately need. They have enough midfielders and one feels Kallstrom has only been brought in to cover while the likes of Wilshire and Ramsey are out injured.

Verdict: Losers Arsene couldn’t even entice Kalou to the Emirates.

Ryan Bertrand coming in from Chelsea is a great bit of business. The champion’s league winner is a great prospect for the future and the experience he could gain from regular top flight football could be excellent in helping his fight for one of the most over-crowded positions in the England team.  He will offer a lot to a defensively frail Villa team. Holt to me is a bit of a strange loan move, he hasn’t been in scintillating form for parent club Wigan scoring just 2 goals in 16 appearances, maybe a step up back to premier league will help him rediscover that scoring touch.

Vincent tan has dipped into his considerable pocket and splashed the cash, bringing in 5 players, interesting as one of the reasons the former manager was sacked was because he spent too much money… Sitting rock bottom Cardiff needed to do something this transfer market and that they have, Zaha has the potential to light up arenas and win matches. Fabio, the lesser of the Brazilian twins has been unlucky not to get games at United and could bring a lot to the Cardiff team, perhaps more going forward than actual defensive work. Jones is a player that I have always rated and the aerial threat he provides could be crucial to a team in need of goals and fast.  Berget has played for Solskjaer before and the new boss has obviously seen something he likes in the young Norwegian, this is a chance for us to see how much the new manager knows about tactics. Daehli, a Norwegian that has been signed from Man United… Anyone else notice a trend in Ole’s buys? By next season Cardiff will be full of United cast a ways and Norwegians!

As I have said on here before I believe the selling of Mata was good business, he didn’t have a place in the squad, the selling of him shows intent and a direction the club is heading in as well as a big cash injection that has allowed the likes of Matic and Salah to come to the club the problem with Chelsea’s spending is the £21 Million they have just spent buying back a player they let go in 2011. Granted Matic is a much better player than he ever was at Chelsea previously and would he have got the chances he has had if he had stayed, most likely not. But, it does seem like a bit of poor decision making by the Blues, Matic is a saviour that helps Chelsea win a title then in typical football fashion all will be forgiven.

A rejuvenated Eagles side have done well to sign one of England’s bright young stars. Palace have recently managed to make it out of the bottom three and to stay away from the dreaded drop zone they will need more goals , Ince could be the man to offer them this.

Traore the 6ft 8in Ivorian monster does nothing but bolster an already strong toffee team, if Martinez can find a way to get him and Lukaku playing together defences up and down the country will be quivering in their pants at the thought of being man handled by the two. Add to that the experience of winger McGeady and the already impressive Everton side look well on their way to achieving great things this season.

A struggling Fulham side had to bring players in this transfer market and to their credit they have done so. Holtby and Kvist will bolster the midfield, or at least Rene Meulensteen will hope so and the bringing back of fan favourite Clint Dempsy can only be good news for the Craven Cottage faithful. Add to that a striker in decent form, Mitroglou, and Fulham are in with a decent chance of reversing their poor league position. Letting Tarrabt, the notoriously difficult personality that has found no form for the club, go will not trouble Fulham and although he displays flashes of brilliance Berbatov is just not the sort of player a struggling team needs. They need players that will put their heart and soul into a game, busting a gut to get back and defend when needed, Berbatov wouldn’t do that to save his own Mother.

Hull having lost 5 of their last 6 games are sinking down into the depths of the table fast, seemingly without a paddle. Long and Jelavic have both been brought in to try and get some much needed goals for the flailing tigers, who haven’t scored in their last 4 games. This could be exactly what Hull need but one would question the signings as neither have been in goal scoring form this season.

Verdict: Could go either way

Liverpool have had no significant dealings in this window apart from loaning out younger players.

Verdict: Losers. I don’t think the current team is strong enough to mount a serious challenge for anything this season, top 4 would be a great achievement but I feel it is just out of reach for the reds.

Verdict: Winners. Who would you even sign if you were pellegrini? He’s team look unbeatable at the moment.

The biggest story of this January has to be the signing of Juan Mata. I will not go into too much detail on this but instead refer you to my previous blog ‘Mata: Who’s really won?’ enjoy!

Cabaye is a huge loss for Newcastle and it’s criminal from Joe Kinnear to allow him to leave, the money may be good but for the team from the Tyne to keep up their current good position players like Cabaye are crucial to not only this season but seasons to come. Although De Jong boasts an average record at former club FC Twente (39 goals in 76 appearances) his record for current parent club Borussia Monchengladbach is less so scoring just 6 in 36 appearances. Let’s hope for Newcastle’s sake his goal tally improves in the premier league.

Norwich have been forgettable in the averageness this year, currently sitting in 12th 5points of the elusive 40 point safety mark I expect them to stay mid table not  really causing any drama. Gutierrez is a good player and addition to the team but it is unlikely that he will spark a revolution amongst the Canaries

Verdict: Neither winner nor loser

Osvaldo is not the sort of player Southampton or any team for that matter want around, infamous for being a difficult character his bust-up with team mate Jose Fonte only served to reinforce this. From a Saints perspective good riddance.

Verdict: Winners. Nobody wants a negative influence around.

Odemwingie’s form of late hasn’t exactly been brilliant but, the swapping of him for tall, powerful Jones shows the intent from Stoke to change their style to that of a more fluid outfit. Combined with the loan of Guidetti the Potters seem determined to escape the route one tag pinned on them. Only time will tell if this will pay off.

Verdict: Mixed. Although the permanent signing of Ireland and loan of Guidetti is good, Odemwingie could appears to be the lesser half of the swap deal. Will he be enough to keep them up. Pitropia has been exclusively revealed on Sky Sports as going through but the deal may not go through for a while.

A bit of a strange signing. Ngog appears to be adding some depth to the squad and will most likely feature in one position, the bench.

Verdict: Losers. Swansea’s team is strong enough to stay up and should do, once Michu comes back all will be ok for the Welshmen buying Ngog seems a bit of a waste of money.

Verdict: Same old. Normal service is resumed as stingy Levy doesn’t allow Tottenham to buy any new players. Then again after all that money spent in the summer who can blame him?

Verdict Losers. With the Baggies hovering precariously above the relegation zone they really could of done with strengthening not weakening their team.

Big Sam has gone big in this transfer market bringing in some top quality players. How his agents convinced the likes of Noccerino to come to East London is beyond me, players like him make West Ham’s chances of staying up significantly improve.

*Note. Not all signings have been included e.g. the loaning out of young players. Only the most significant transfer dealings have been displayed to keep this long post as condensed as possible.