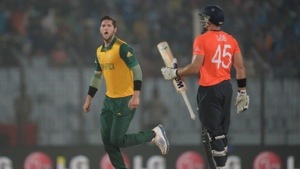 A triumphant Parnell takes it upon himself to dump England out of the T20 World Cup.

In the wake of an appalling tour of Australia and an early exit from the T20 World Cup many have begun to question England and the ECB. The root of these failings seems to run deeper than just a spout of poor form. Could it be that the once world beaters have become nothing more than mediocre?

England were appointed the number one test cricket side in the world during the summer of 2011, after a demolition of India at Edgbaston, for a time all seemed to be well. We as a nation may have been less than great at football and suspect on a rugby field but at least we were the best in the world at one of the sport’s we had invented. Not only were England recognised as the best test team in the world, the one day team weren’t too bad either.

The years at the top were fantastic and from a fans perspective, it was refreshing to go into a match of any kind knowing that the team were the favourites to win, no matter the opponent. After a few high flying years the English freight train started to slow down after a bellow par tour of the West Indies last Spring and the train well and truly halted during the last Ashes tour. During the Ashes of 2014 England were not only beaten but they were destroyed 5-0. Handing back the urn to the age old enemy seemingly with no fight at all. This came as a shock to many but, with hindsight, there were many factors that seemed to scream unrest amongst the squad.

The tour of the West Indies in spring last year was far from ideal and the bowlers at times carried the batsmen, a trend not too uncommon. England’s bowlers as of late have been some of the best maybe ever, Jimmy Anderson and Stuart Broad on their day could instil fear into the heart of any batsmen. So, the batsmen seemed to be a weak link in the England side, mix that with a misfiring attack out in Australia and you have yourself a problem.

Further to this, there was the Trott debacle which can be seen to highlight unrest amongst the squad. Would a player go home early if team morale was strong? Would a squad with a strong team morale let him?

The poor team morale was exposed to all post-Ashes with the expulsion of the highest scoring batsmen and Mr charisma himself Kevin Pietersen. While this scandal was at its peak I wrote a blog suggesting that he was retired by the ECB to save captain Alastair Cook. This subsequently seems to have an element of truth to it but more importantly can be seen as the final straw, the implosion of English cricket. Implosion, because that is what it is. England do not have a lesser team than that of three years ago, the rest of the world do not posses players that are head and shoulders above of England but what they do have that England do not is team spirit.

That is the test side. This evening, 29th March, the T20 team mis-fielded their way out of the world cup. Almost an antithesis of the test side the batsmen, especially a certain Alex Hales, were the only source of light amongst a dreadful showing in the field. Some may say that the team were unlucky to lose out to New Zealand on Duckworth-Lewis rules and being narrowly beaten by South Africa after their huge knock of 196. To an extent this is true, England produced some huge innings with the bat but the reason they are out is not due to other teams playing better, the bowlers are to blame. A lot was made of the dew on the pitch as well as the exceedingly humid conditions but, every team has to deal with these factors therefore I find that excuse unacceptable. If you are to compare the English to the South African team it was clear who would win from the very start of the game. While the national anthems were being sung the Proteas were seen arm in arm from starting players to the back room staff singing their hearts out, a passionate, unified team. England do not appear to have that kind of team spirit and until this changes I predict more upset.

It was excellent to see an English team at the top but, after further disappointment I am hit with the overwhelming feeling that our time as the world’s best has passed. It would appear that normal English performance has resumed and as we quickly slip down the ranks into the realms of mediocrity the impending sense of failure appears to loom large.